Meeting with the Benedictine Monks and the General Practitioners

After the first earthquake struck Central Italy on August 24, 2016, hundreds of Italians villagers died and tens of thousands were dislocated. But the tremors continued, culminating in a devastating earthquake on October 30, 2016, razing ancient villages in the mountainous regions of Lazio, Umbria, Marche, and Abruzzo. The beautiful medieval monasteries of the Benedictine Order in Preci and Norcia were completely destroyed.

The National Italian American Foundation (NIAF) generously supported the Team’s activities, focusing on the health and mental health of earthquake survivors. The Harvard-Italian Team went to Norcia on August 2-3, 2017. The goals of the Team were to assess the earthquake damage, its impact on the local community, and to establish linkages to the local Benedictine Monks and Italian general practitioners of the region. All goals were achieved. 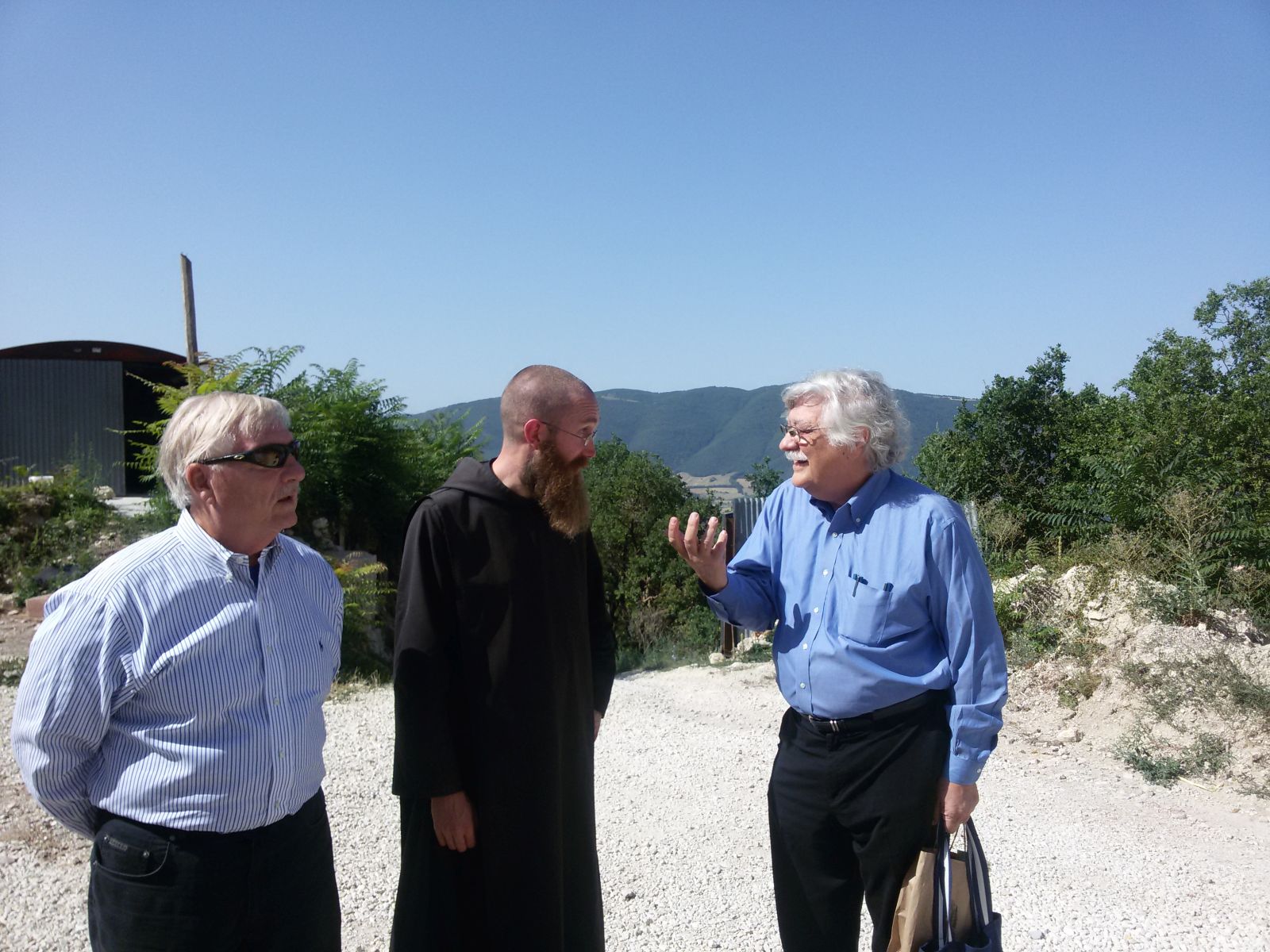 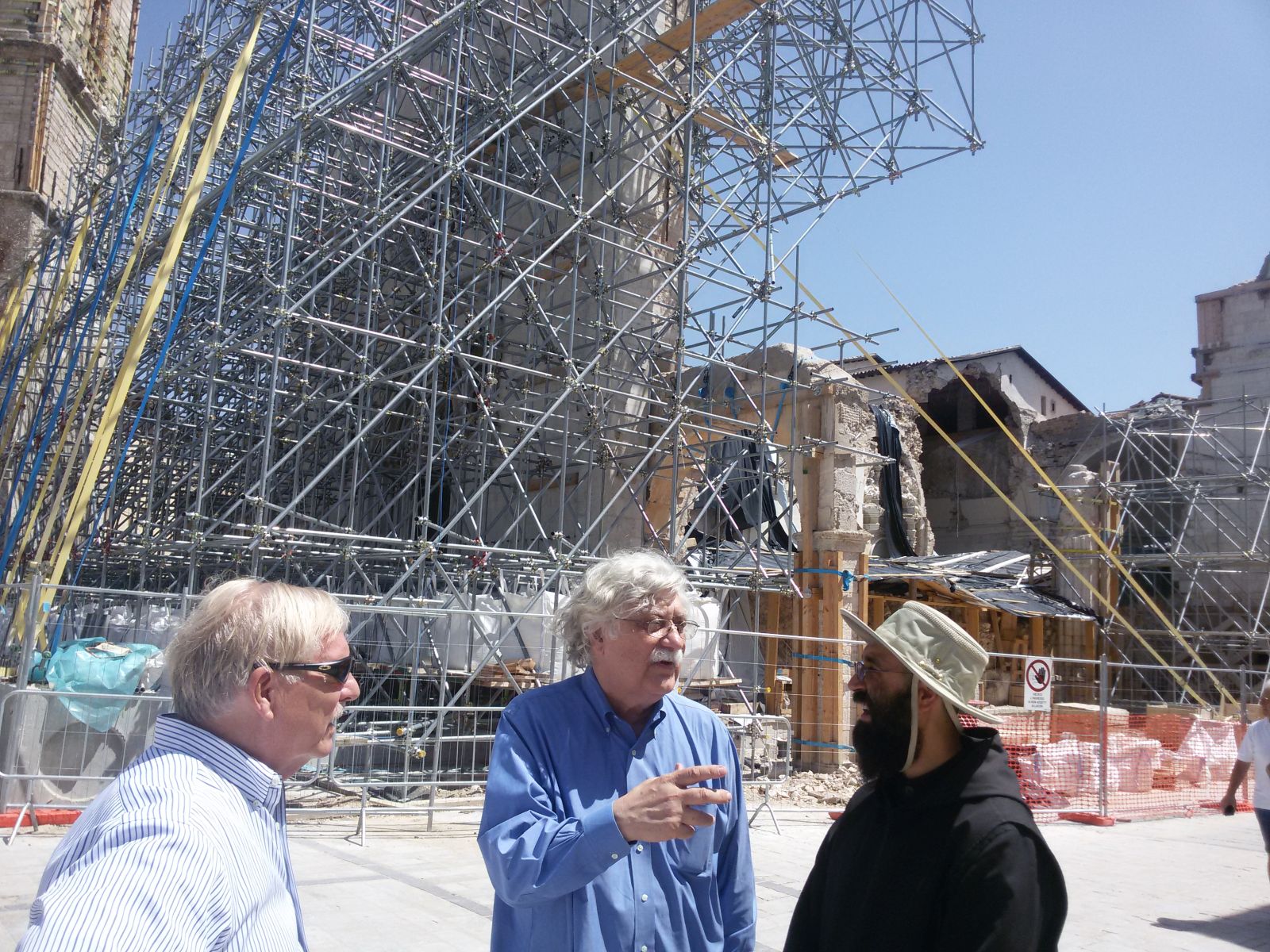 The Harvard-Italian Team was able to make direct contact with the Benedictine monks living in Norcia. Norcia is a great spiritual center of Italy and Europe: it is the birthplace of Saint Benedict in 480 A.D. St. Benedict is the founder of the first monastic order in the Catholic Church. Legend has it that he established monastic life as a spiritual response to the decay of the Roman Empire. St. Benedict’s major treatise, The Rule of Saint Benedict, is still an inspiration for monastic life through the world.

The day of the visit, the team consisted of Richard F. Mollica, Irene Toniolo (psychiatrist) and Sonia Graziano (psychologist), Eugene Augusterfer (LICSW), and 4 students: 2 American psychologists-in-training, an Italian architect, and Sergio Lucchi, a member of the Umbrian Civil Protection. The Team traveled into the mountains of central Italy. The landscape was a beautiful scene of forested mountains and valleys. Immediately after arriving, the team was in contact with Father Basil, the lead Benedictine monk. The local Benedictine Monks revealed extraordinary resilience. Two days after their beautiful medieval monastery was completely destroyed they moved out of their tents and began building a wooden church on a local hill-top. The new church, beautiful in its simplicity, heralded a new age of the Benedictine Order within this earthquake devastated community. Father Basil led us up the hill to the new wooden church. Here we celebrated mass with the monks next to the badly damaged small mountain church. The bell from their medieval monastery in town had been rescued, and it rang out loud and clear. Our first moments in this devastated landscape were magical and spiritual. This initiation set the emotional framework for the rest of the Norcia visit.

After mass, Father Basil escorted the Team into the devastated city center. There was an eerie calm and tranquility all around us as we surveyed the city. Citizens of Norcia walked the streets, calling their greetings to Father Basil as he passed. It was clear that Father Basil and his fellow monks were beloved members of the community. Father Basil mentioned that although his religious community had a strict schedule of prayer and singing, they would make time to counsel the local citizens in order to provide them with support and a sense of hope. Father Basil led our Team inside the destroyed monastery. Books were strewn everywhere, the library in ruins. He showed us the monk’s renowned brewery, where they earn income to support their community by making a delicious Belgian-style beer called Birra Nursia Bionda. Unfortunately, although the brewery is still operational, the monks are not allowed to work inside the monastery due the danger of imminent collapse. But they have plans to return soon.

In the afternoon, Father Basil took us to meet the local doctors and head nurse. The Harvard-Italian Team met with the courageous and dedicated Italian general practioners lead by Dr. Lelio Palla and Dr. Illario Salvatori. This medical team pointed out the social determinants of illness affecting the survivor population. They were excited that we were there to help them provide mental health assistance to the local community. Most of their conversation focused on the social determinants of physical and mental health, which lead to the so-called “second wound” following a disaster. The “first wound” is caused by the disaster itself. The “second wound” is caused by poor public policies and lack of appropriate political action in the aftermath of the disaster. Among the problems faced by the local people after the earthquake were the following: separation from their farms, animals, neighbors, and friends; bureaucratic rules; relocation to the Adriatic coast, Rome, and other places far from Norcia; temporary housing. The nurse told us a beautiful story of a Norcia woman who traveled three hours by bus from the coast back to Norcia in order to have her blood drawn, so that she could return “home” and see her nurse again, a familiar face in the midst of dislocation.

The doctors took our team on a tour of Norcia. They began with a stop at the River Turbidone. The Turbidone River has re-surfaced after it disappeared in the great earthquake of September 1979. The “rebirth” of the river is considered a “miracle of hope” to the local people. The doctors then showed us the temporary housing. In one of these camps, the people had brought in plants for every table and hung a beautiful rosebud symbol on the wall as a symbol of their hope that declared “I love Norcia.”

The Harvard-Italian Team has agreed to: